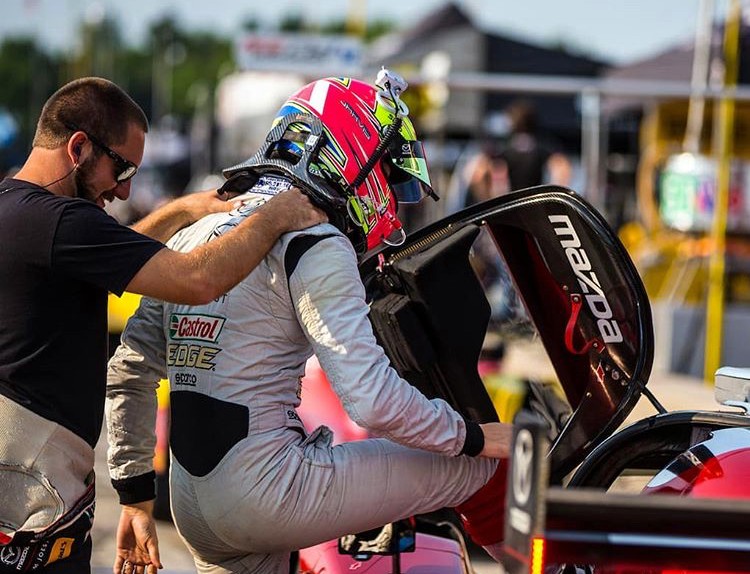 Mazda Team Joest narrowly missed out on their first victory in the IMSA WeatherTech Sports Car Championship at the previous round at Road America, when the No. 55 Mazda RT24-P of Harry Tincknell and Jonathan Bomarito led the Prototype class throughout the final hour of the race. Before being slowed by a wheel nut failure during a pitstop, the No. 77 Castrol/ModSpace Mazda RT24-P of Oliver Jarvis and Tristan Nunez ran strongly in the top-five of the race.

This weekend’s race will mark the first appearance for the Mazda RT24-P at WeatherTech Raceway Laguna Seca. In 2016, Mazda locked out the front row of the Prototype class in the IMSA with Nunez taking pole position before he and Bomarito finished in fourth position.

Nunez and Mazda recently celebrated a victory at WeatherTech Raceway Laguna Seca, as he drove the 1992 Mazda RX-792P, driven by Price Cobb in the GTP class throughout the 1992 IMSA championship, to victory at the Rolex Monterey Motorsports Reunion.

The Continental Tire Monterey Grand Prix will be shown live on FOX Sports 1 on Sunday, September 9 at 5:00 PM ET.

John Doonan, Director, Mazda Motorsports
“WeatherTech Raceway is obviously near and dear to everyone’s heart here at Mazda. With our longstanding relationship at the track, it would be so fitting to grab another podium, or better yet, our first victory there. Our Mazda RT24-Ps have been running extremely well, Jonathan is the hometown boy, and the track has always treated Mazdas well. The characteristics of the circuit always reward good-handling race cars. We plan to give it absolutely everything we have, as always, and look to get a great result for the Mazda family and all of our fans.”

Oliver Jarvis
“The last few races have been quite tough and I don’t feel we have achieved the results we deserve, but I am heading to Laguna full of optimism as itis a track I feel should suit our Mazda RT24-P. Having tested at Laguna earlier in the year, it is one of the few tracks I will have driven before arriving at the race weekend – which is a big positive. This year has passed incredibly quickly and with only two races remaining, I know the whole team will be focused to achieve that elusive victory.”