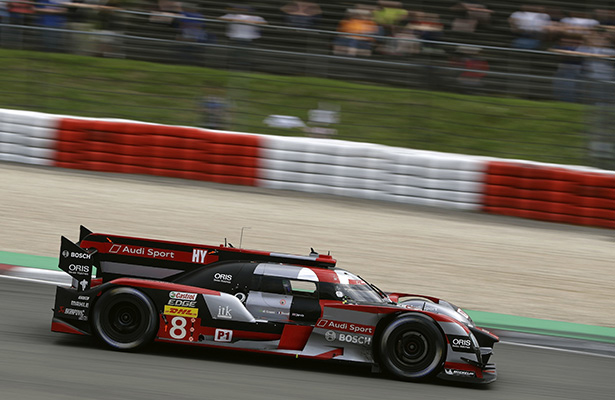 The Nürburgring race has such a big importance, as it is the track all three manufacturers bring their last and final aero upgrades to, and can really signify the competitive order for the rest of the season.

After a difficult Le Mans and having arrived confidently at the Nürburgring last year only to find ourselves outpaced by the Porsches, this year I arrived in Germany with some nervous anticipation.

There has been no doubt we have had a quick car in the opening races to this year’s FIA World Endurance Championship but we’d failed to extract the speed at times.

Free Practice immediately started well with a good balance in the car, and competitive lap times.

Even in mixed conditions the car felt good and we were confident heading into qualifying. The session started in difficult conditions as the track was still damp in areas but was quickly drying which was evident from the GT qualifying moments before.

I started and we decided to start the session on slicks which immediately proved to be the right call. I set a ‘banker’ time on my second lap before pushing on my third knowing that the track was improving all the time.

Unfortunately, exiting Turn 4, I ran wide and outside track limits which meant that the lap wouldn’t count so despite being significantly faster we took the decision to abort that lap and box.

Lucas then jumped in the car and immediately set a very quick lap which meant we had just enough time for me to get back in to the car and try to improve my time.

On my first lap, I caught traffic which meant I had just one more to try to improve and claim pole position.

Things were going well and I was comfortably faster despite catching traffic. However as I approached the last chicane it had started to rain heavily and I was caught out under braking as the rears immediately locked causing me to spin.

This meant we had to settle for second on the grid just missing out on pole to our team-mates in the No. 7 Audi.

I took the race start, with Marcel starting alongside me in pole position. I got a great initial start before Marcel was able to boost past me and regain the lead on the approach into Turn 1.

I tried to tuck in behind but the No. 1 Porsche was able to get a better drive out of the corner and take second going into Turn 2. My entire first stint was a really close battle, at times the front four cars were covered by less than four seconds.

After my initial pit-stop I regained third position and this time behind the No. 7 Audi, as the Porsche had taken the lead. I was able to quickly pass André and set my sights on closing the six second gap to the Porsche.

With the car feeling good I was soon able to close the gap and pass the Porsche taking the lead before handing the car over to Lucas. With the Porsche out of sequence due to a slow puncture we regained the race in third just behind our sister car.

It looked like it would be a straight fight between the No. 1 Porsche and the two Audis with less than five seconds separating them before a FCY had a huge influence on the race. Porsche No. 2 was able to pit under FCY and gain 50seconds, therefore jumping from 4th to 1st.

With 3 hours to go this meant we had to set about closing the 25-second gap to the leading Porsche. With constant pressure, the No. 2 Porsche eventually made a mistake in traffic and later received a drive through penalty for contact with a GT car.

After taking the penalty the No. 2 Porsche returned to the track just behind us with Loïc now at the wheel. With our car now struggling a little compared to earlier in the race, the focus was now on keeping the No. 2 at bay, and maintaining 2nd place rather than closing the gap to the #1 Porsche.

Loïc was doing an amazing job at defending from the quicker Porsche fully aware that every point could prove crucial in the championship.

Eventually the fight between us and the No. 2 Porsche allowed André to close up and attack the Porsche giving us some breathing space at the same time.

During this fight the No. 2 Porsche got hit from behind causing damage to the left rear legality panel meaning they had to make an unscheduled stop for repairs. Now with a comfortable gap back to the No. 2 Porsche both Audi’s set about bringing the cars home in 2nd and 3rd position.

It was a fantastic result overall, and to go there and be competitive and capable of fighting for the win was a great reward for the hard work back at Audi Sport.

Nevertheless we can’t help feeling slightly disappointed not to get the win after starting with both cars on the front row.

Having proved we’ve made progress from Le Mans, I can’t wait for the next race in Mexico and to once again try and close the gap in the championship!