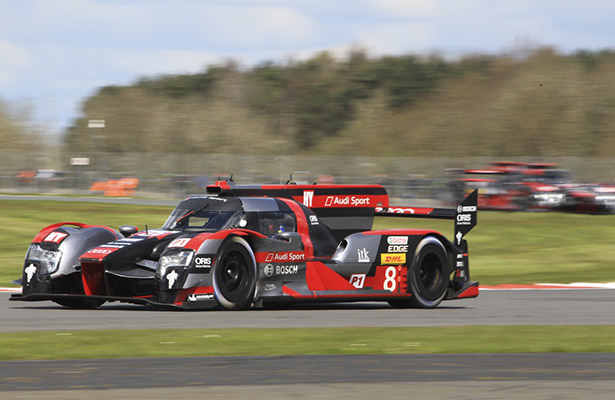 It’s fair to say that it hasn’t been the easiest of winters for Audi.

This year we have built a completely new car, and in the process changed from a 4MJ flywheel hybrid system to a 6MJ battery system.

This has meant a very steep learning curve, and the majority of early seasons tests were very much focused on reliability.

With this in mind, we weren’t really sure what to expect in terms of pure performance compared to our competitors Porsche and Toyota.

If the Prologue was anything to go by, both Toyota and we had closed the gap over the winter to the current World Champions, but Porsche still seemed to have a clear advantage.

Despite the uncertainty around our true performance, I arrived at Silverstone for my second season as a full time WEC driver, much more relaxed, having that additional year of experience and the benefit of a strong finish to 2015 with my teammates (Loic Duval and Lucas Di Grassi) proved invaluable.

Free Practice 1 started of on a damp track, and despite the forecast of more rain it dried towards the end of the session, so we took the decision to get all three drivers in the car and acclimatize to the track, in case that was the only dry running we got before the race!

Surprisingly, the rain held off in the afternoon and in FP2 I was able to do a long run to try and gather some data on tire wear and performance.

These long runs are so important as they provide so much information ahead of the race, allowing the engineers to make race-defining decisions, like the tire strategy and car set up.

We had already decided as a team that Loic and Lucas would qualify, as I wanted to start my home race, and therefore I wasn’t planned to drive in the shortened FP3.

I have to confess to thinking I had made the perfect decision as I sat in the garage Saturday morning watching the snow fall! I was more than happy not to drive, and not surprised at all that the practice was eventually red flagged.

Qualifying started in very similar conditions to FP1, with a wet track, and it was a complete surprise for us (Audi) to end up P1 & P2, especially as Porsche had shown such strong pace in FP1 in similar conditions.

I was amazed to hear that it was Audi’s first pole since 2013. It was a great moment for the whole team that worked so hard over winter to give us a competitive car.

For us in No. 8, Loic and Lucas did a fantastic job, and we were only denied the chance to fight for pole when we had an issue with the car on Lucas’ last flying lap when he was two-tenths quicker than his previous lap (enough to secure pole position).

We were happy to start on the front row, but couldn’t help feel that we had missed out on a potential pole position.

Race day weather was in complete contrast to the previous two days, with clear blue skies and the sun shining. Hard to believe it was the same track where we had to abandon FP3 for snow!

Heading into the race I had a really good feeling; We had a good car over the long runs and I was confident we could take the fight to Porsche.

The start went exactly to plan, and Andre and I were able to maintain our positions and pull a small gap to the chasing Porsche’s.

It wasn’t long before we caught traffic, and I was held up exiting the last corner giving Mark Webber the chance to overtake into Turn 1.

Over the next few laps I tried to attack but couldn’t . It took me a few laps to get into the rhythm in traffic, but I set about closing the gap to the sister car (No. 7 Audi).

I was able to close the gap approaching the first pit stop, and a great stop from my crew meant I came out in front.

The second stint was going really well and we were able to maintain the gap to the lead car, until 3 laps from the end of my stint when we had a hybrid failure.

I was able to get the car back to the pits for our scheduled second pit stop where Lucas took over. Unfortunately, unable to reset the hybrid we continued, but significantly slower than we had been, until eventually we had to stop the car on track and retire.

We were absolutely devastated to have been in such a strong position and be forced to retire the car.

Last year we felt we had our fair share of bad luck and, we were all hoping that we had put it behind us.

On the plus side, it was a great reward for the Audi team to see the No. 7 on the top step of the podium. Now we look forward to getting back in the car, and really kick starting our year in Spa.