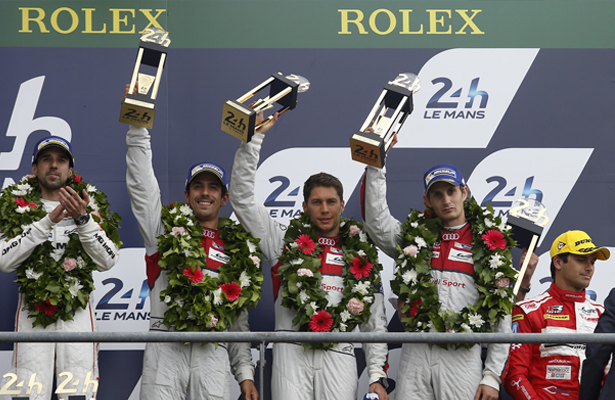 After a few days of recovery, and trying to get my head around the events of last weekend, I still don’t think it has sunk in.

It was the strangest feeling being stood up on the podium at Le Mans over looking thousands of people, many of whom didn’t grasp why the Toyota crew of No. 5 were not up there instead of ourselves.

I can honestly say that I would have preferred to see Anthony, Sébastien and Kazuki up on the top step receiving the winner’s trophy that they – and the whole of Toyota – deserved.

Even taking away the fact that eventually on track they were beaten by the No. 2 Porsche, it’s hard to explain or even to understand how a car that completed 12 laps more than ourselves, AND crossed the finish line was not classified.

For Audi it was an extremely tough race, both in terms of performance and reliability.

After the pre-test we headed to Le Mans confident that we had a car quick enough of winning, but after the first two races of the season (Silverstone & Spa), I don’t think any manufacturer was 100 percent confident of reliability.

Throughout the build-up I kept saying that reliability could play a key role, I just never believed that this would be the case after 23 hours and 57 minutes.

With the mixed conditions, and the fact that we lost some dry running on the Wednesday due to a front drive train failure, we were confident that our 6th place wasn’t representative of our true pace and were hopeful that we could improve on this in Thursdays qualifying sessions.

Unfortunately, due to the heavy rain overnight the track had very low grip in the first session and the second was once again hit with heavy rain so we had to settle for 6th.

This wasn’t something that concerned us, as although its great to get pole in Le Mans we were fully aware that qualifying holds little importance in the end result. Incredibly, due to the issue on

Wednesday and the difficult conditions bringing about numerous red flags Loic and myself were heading into the race with only a handful of dry laps, all of which had been affected by slow zones etc.

The race started under the safety car due to the heavens opening just before the race start. This was definitely the right decision, but I can appreciate and understand the frustration from the spectators that it was left out so long.

Loic was starting for us and things looked really positive early on with us at one point taking the lead of the race.

However, as the track fully dried it quickly became apparent that neither us, nor our sister car (No. 7) had the pace of our rivals. By the time I got in as the second driver we were already over 40 seconds down on the lead car.

Throughout the night I feel our pace improved, but unfortunately we had lost too much time through small reliability issues, meaning we were now a lap behind and in fourth place.

We kept pushing in the hope to close the gap with a potential podium as a reward, but we knew by the time morning had arrived that it was out of our control and it would come down to the reliability of our competitors.

I got in the car for the third time at around 10am Sunday morning, and by this time you could feel that the track had “gripped up” which had helped the balance of our car, but unfortunately it was simply too late.

It wasn’t long before I started having braking issues and eventually we had to pit due to an issue with the right front disc. This meant a lengthy repair in the garage and at one point I thought we were going to lose our fourth place to the sister Audi.

Fortunately, our mechanics did as always a fantastic job and we managed to get back out just in front of No. 7.

By now, there was less than 3 hours left and it was simply a case of bringing the car home, and to keep things interesting by trying to set quick laps when ever the opportunity arose, before handing the car over to Lucas.

I remember standing in the garage and watching the Toyota doing its final laps. I actually felt nervous and really pleased for them because it was a victory they fully deserved.

As it stopped by the finish line with 1 lap to go the whole Audi garage was in absolute disbelief, with many bursting into tears.

Nobody wants to see a competitor lose a race like that, especially such a fantastic competitor like Toyota. It was the cruelest thing in motorsport I have ever seen.

As a team, we now have four weeks to analyze and understand what went wrong in Le Mans and to put it right for the rest of the season.

We have a big points deficit to the No. 2 Porsche but we are still in the championship fight, currently in second place. 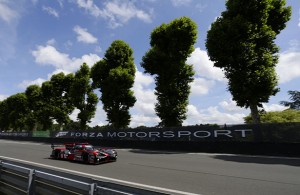